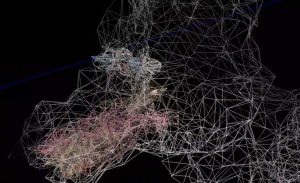 in 2015, while working at projektil.ch in Zurich,

I developed a piece of software for live-perfomances and visuals with the working title <Psycho Manege>.

the concept-idea was to control a multi-stage round-robin filled with animated and audio-reactive 3D models via gamepads and midi-controllers.

the output of the program would be projected on a 360 degree stage, mapped with 4 projectors on several layers of semi-transparent cloth.

following are some screen-captures of earlier proof-of-concept sequences.

focus of these tests was to showcase the audio-reactive vertex-distortion, implemented by generating a simplex-noise texture on the gpu and feeding that into the vertex shader-stage to move vertices along their normal vector, a.k.a. displacement mapping. not particulary tricky but it sounds and looks cool 🙂

this work led to a two evening, bombastic live-visual performance together with my colleague Moritz Flachsmann at Lethargy Festival 2015, Zurich.

basically I was performing the animal round-robin, adding/removing/controlling the 3D models and parameters, while we fed the output into Modul8, where Moritz took over the 2D domain.

we were quite happy with our work-flow and results. here’s Projektil’s documentary video of the event, cut by Cadu.

thank you Moritz and Projektil for this one!